Curtiss-Wright Controls Embedded Computing, a leading designer and manufacturer of commercial-off-the-shelf (COTS) systems and board level products, is using the XJTAG boundary scan development system to improve the process of debugging and testing its range of radar, video and graphics products.

Faced with the challenge of improving the process of debugging and testing its latest range of highly complex ball grid array (BGA) populated printed circuit boards, engineers at Curtiss-Wright’s video and graphics group in Letchworth, England, set out to find a cost-effective boundary scan solution.

“We selected the XJTAG system due to its price, the speed and accuracy of fault diagnosis, and because the re-usable test scripts can be ported from project to project and migrate through design, prototyping to production and beyond”, said Alan McCormick, managing director of Curtiss-Wright’s video and graphics group.

XJTAG is now being used to debug and test products such as Curtiss-Wright’s Sabre imaging platform, which combines a high-performance PowerPC processor with a multi-head, multi-layer graphics video and radar display capability in a single VME slot.

It is also being utilised on the Osiris dual-channel radar interface board. “Using XJTAG, we are able to very quickly debug and test both the boundary scan and cluster devices on our Sabre and Osiris boards, many of which are inaccessible to traditional test methods such as flying probes, logic analysers, oscilloscopes and X-ray systems”, added Stuart Allen, senior hardware engineer at Curtiss-Wright’s video and graphics group.

XJTAG enables engineers to test a high proportion of the circuit including BGA and chip scale packages, such as SDRAMs, Ethernet controllers, video interfaces, Flash memories, FPGAs and microprocessors. The ability to test both boundary scan and cluster devices gives engineers valuable extra flexibility to design tests for critical parts of the board.

“We are using FPGAs on many of our cards and with the XJTAG circuit visualisation tool (XJAnalyser), we can read and write to all the thousands of device pins on an FPGA or another JTAG-enabled device and validate that every pin is functioning whether or not it is being utilised in the first release of the product or not”, added Stuart Allen, “This capability is very valuable”.

We selected the XJTAG boundary scan development system due to its price, the speed and accuracy of fault diagnosis, and because the re-usable device-centric test scripts can be ported from project to project and migrate through design, prototyping to production and through into field test roles.

Using XJTAG, we can very quickly debug and test both the boundary scan and cluster devices on our boards, many of which are inaccessible to traditional test methods such as flying probes, logic analysers, oscilloscopes and X-ray systems.

Nature of business: Designer and manufacturer of rugged and benign radar, video and graphics products

Locations: Letchworth (UK), plus group sites in the United States, Canada and Europe 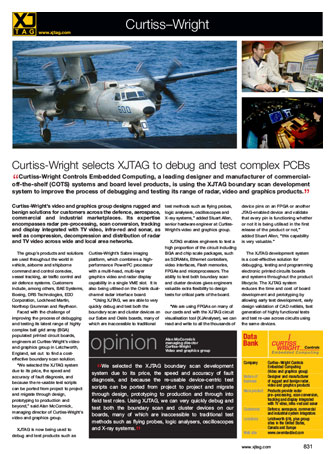