TUBITAK Space Technologies Research Institute (TUBITAK UZAY) has chosen XJTAG to help test high-value electronic assemblies for space, communications, and remote sensing and data processing applications. XJTAG’s speed and flexibility has helped accelerate the delivery of qualification models and will soon be applied to the testing of flight models.

The electronic systems at the heart of TUBITAK UZAY’s space projects contain high-value PCB assemblies populated with expensively qualified and radiation hardened components. They are typically built with non-volatile antifuse FPGAs, teamed with system components such as robust memory, I/O buffers, and serial/parallel communication ICs. In addition to high component costs, lead times for the qualified components also tend to be long. To avoid time pressures and unwanted extra costs, any defective PCBAs need to be identified and fixed rather than replaced. This is where XJTAG provides invaluable assistance.

Commenting on XJTAG’s ease of use, he highlights the system’s built-in advanced interconnection test as one of the system’s greatest advantages. “Often, we already have functional test and self-test routines/codes for our boards although switching between them is not always possible. This is especially true when using antifuse FPGAs. XJTAG makes writing test scripts for specific devices extremely easy. There is a large library of pre-written tests and the XJEase scripting language makes light work of writing custom tests.”

He goes on to emphasise the flexibility of the system, drawing attention to the XJLink2 module provided to connect the unit under test to the host PC. “The XJLink2 pin assignments are fully programmable and easy to configure. Moreover, because the module contains the XJTAG system license, we can do XJTAG testing on any PC in the lab, which helps avoid hold-ups and bottlenecks.”

“The user interface is also easy to use, with a modern look and feel that we like,” he continues. “The system also integrates well with Altium Designer®, our preferred PCB design environment, so we can work easily with our favourite tools and be constantly productive.”

Ufuk Onder concludes, “We started using XJTAG to accelerate testing of boards for qualification models. This has proved so successful that we are now planning to use boundary scan in every board, from first prototypes to flight models.”

We started using XJTAG boundary scan to accelerate testing of boards for qualification models. This has proved so successful that we are now planning to use boundary scan in every board, from first prototypes to flight models. 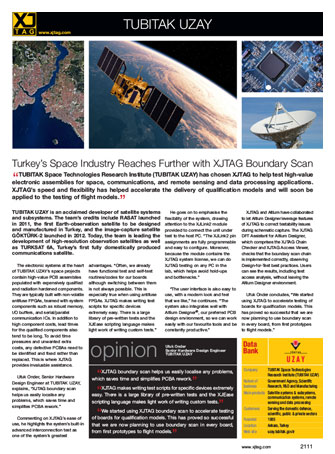