Leading European defence communication specialist EID has selected XJTAG over its previous solution because of price, ease-of-use, superior service and the flexible features that the XJTAG system offers to EID’s engineers. XJTAG is being used to test complex printed circuit boards in manufacture and to program non-JTAG devices in-circuit.

EID is one of the leading high-tech companies in Portugal, with a proven record in the fields of electronics, communications and software engineering. The company designs, manufactures and supplies advanced high performance equipment and systems, mainly for the worldwide defence community.

Having worked with other boundary scan suppliers in the past, EID chose XJTAG as its boundary scan partner because of the valuable features the XJTAG system offers, particularly the flexibility that the technology gives EID’s engineers in their testing.

XJTAG has features that speed up boundary scan test development. These tests are written in the high level test description language, XJEase, that simplifies testing for non-JTAG components from simple loopback connectors, through UARTs, Ethernet ICs to DDR3 or flash memory. The tests are written at the device level, and so can be used again even as other parts of the board are redesigned, thereby delivering ongoing time savings.

“It is important to detect faults as soon as possible and some defects can only be found using boundary scan technology”, says Test Engineer, Isabel Oliveira.

“We chose XJTAG because it is a versatile tool that has been designed with engineers in mind. We have previously worked with other boundary scan systems, but opted for XJTAG because of its excellent price/performance ratio.”

She adds: “The XJTAG system has a number of features which make it an obvious choice, including the easy-to-learn programming language, XJEase, and the extensive library of re-usable scripts that comes with XJDeveloper”.

EID is using XJTAG to test SDRAM, DDR, Flash (including SPI Flash), Ethernet PHYs and CODECs as well as other non-JTAG devices which can be accessed indirectly via the JTAG devices in the chain. EID’s engineers are also using XJTAG for In System Programming (ISP) of FPGAs, Flash and CPLDs.

The compact and portable XJLink2 hardware that contains the XJTAG license has also been a major benefit to EID, allowing the system to be easily moved around the lab, or to another site if required.

Isabel explains that it wasn’t just the technology which prompted EID to choose XJTAG as its boundary scan partner. “It was very important to us that we worked with a boundary scan supplier who can offer us ongoing technical support”, she says. “XJTAG is known for its friendly and knowledgeable team of engineers, and we have found them to be extremely helpful whenever we have a question or need assistance with an issue. This, along with the intuitive features of the XJTAG system, is what made us choose to work with the company.”

XJTAG is known for its friendly and knowledgeable team of engineers, and we have found them to be extremely helpful whenever we have a question or an issue we need assistance with. This, along with the intuitive features of the XJTAG system, is what made us choose to work with the company.

The XJTAG system has a number of features which make it more desirable than its competitors, including the easy-to-learn programming language, XJEase, and the extensive library of re-usable scripts that comes with XJDeveloper.

Nature of business:
Supplier of high performance systems to the worldwide defence community 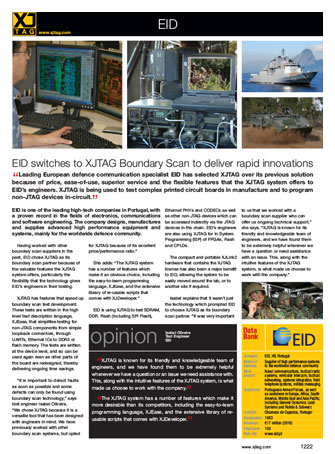