Koito Electric Industries, a developer and provider of Vehicle Monitoring Systems for the transportation industry, has integrated XJTAG boundary scan in its diagnostic system to improve productivity. The company is now able to test complex circuit boards populated with a wide range of devices, such as CPLDs and FPGAs, which will be deployed in North American railway systems.

Headquartered in Nagaizumi, Japan, Koito Electric Industries is a leading supplier of rolling stock instrumentation, traffic management systems, and traffic information display systems. The company has international clients in a number of countries including Japan, the UK and the USA. Amongst these clients are MTA New York City Transit, Railway Companies in Japan, Expressway companies in Japan, Kawasaki, ALSTOM and Hitachi.

Koito develops and sells its Vehicle Monitoring System to be used mainly in rolling stock, such as rail carriages. Koito Instruments also produces equipment including LCD and LED display systems for warning signs and information displays in related facilities such as stations, yards and control centres.

“Integrating XJTAG boundary scan with the Koito inspection system allows us to control and monitor the status of non-JTAG device pins from the CPU/FPGA and isolate faults on the component under test. This enables our engineers to control pins and nets in a more sensitive and sophisticated way than could be achieved by controlling them directly through connectors on the board”, comments Mr. Tsuyoshi Noboritate.

”We selected XJTAG because of its attractive performance to cost ratio compared with other boundary scan testing solutions. Furthermore, when evaluating XJTAG, we found it was easy to integrate with our system. One of the most valuable aspects of XJTAG was the ability to easily create and customise tests for both JTAG and non-JTAG devices. Thanks to XJEase, the flexible, high-level programming language of XJTAG, it is possible to develop complex tests without having to understand how boundary scan works. Because the scripts are generated with a device-centric approach, they can also be re-used in future projects without modification.

“Using the XJLink USB-to-JTAG interface, we can control the JTAG compliant devices on the units, typically CPUs, FPGAs and CPLDs. Boundary scan access to these devices enables XJTAG to generate simulated bus signals to test many other key ICs connected to the same nets, such as EEPROMS, memory, Flash or Ethernet PHY. This has significantly increased the test coverage that our engineers can achieve using XJTAG.

“In certain areas, such as beneath BGA devices, it is not easy to enhance test coverage using functional test alone. By leveraging XJTAG boundary scan to test our MDS (Monitoring and Diagnostics System), which is used in New York subway cars, the MDS now has better test coverage at a much lower cost.

“Amongst JTAG testing systems, we have found XJTAG to be the most cost-effective solution for testing both JTAG and non-JTAG devices. It offers us ease of use and flexibility, and contains an extensive library of re-usable device tests.” Moreover, Koito found XJTAG’s technical support to be the most accessible and responsive. “XJTAG is a fast, efficient and powerful boundary scan tool that is well-suited to Koito’s needs”, adds Mr. Noboritate.

We selected XJTAG because of its attractive performance to cost ratio compared with other boundary scan testing solutions. Furthermore, it was easy to integrate with our inspection system.

By leveraging XJTAG, our Monitoring and Diagnostics System now has better test coverage at a much lower cost.

A most valuable aspect of XJTAG was the ability to easily create and customise tests for both JTAG and non-JTAG devices. We can control and monitor the status of non-JTAG device pins from the CPU or FPGA and isolate faults on the component under test.

Nature of business: Developer/manufacturer of technical equipment for railway systems 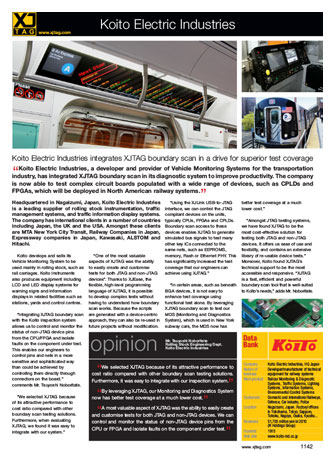