nCipher, a leading provider of cryptographic IT security solutions, needed a flexible boundary scan solution that could test a high proportion of a circuit including JTAG and non-JTAG devices, for use by its engineers to debug and test printed circuit boards (PCBs) for its range of hardware security modules (HSMs); and for use by its contract manufacturing partner for testing production boards

Boundary scan testing offers a solution to the challenges presented by high component density, the increasing use of area array packages – such as ball grid arrays (BGAs) and Field Programmable Gate Arrays (FPGAs) – and the prevalence of complex, multi-layer PCBs, which make test probe access and bed of nails testing impossible for many new board designs. The XJTAG Development System aims to solve these challenges and also allows test programs to be re-used and optimised for production testing.

The powerful and easy-to-use XJTAG Development System is designed to cut the cost and shorten the development cycle of electronic products and provides a unique solution that can test JTAG as well as non-JTAG devices. XJTAG can test a high proportion of a circuit including BGA and chip scale devices, SDRAMs, Ethernet controllers, video interfaces, flash memories, FPGAs, microprocessors and many other devices. XJTAG can be used to debug and test any circuit provided it has at least one JTAG-compliant device present.

nCipher has licensed the XJTAG system for use by its engineering team at its headquarters in Cambridge, England, where its range of hardware security modules (HSMs) are designed and developed. nCipher provides hardware and software solutions that enable organisations to implement best practice IT security by addressing the technical challenges of using encryption. Many of the world’s leading organisations – from Microsoft and Barclays Bank to PricewaterhouseCoopers and the U.S. Navy – rely on nCipher to help deploy a sound e-security infrastructure.

nCipher’s products are particularly well suited to organisations with high volumes of security-sensitive transactions, such as banking and financial institutions, government departments, e-retailers and online service providers. nCipher’s HSMs support IT security industry encryption standards and protect the cryptographic keys that must remain an absolute secret for encryption to have any benefit.

“The constant drive for product improvement forces our circuit boards to become ever smaller and by using BGAs and other JTAG-compliant devices we are able to mount more complicated devices onto the circuit board. The connectivity and manufacturing of these more densely populated boards make them more difficult to test by traditional methods”, said Colin Domoney, digital hardware design engineer at nCipher. “XJTAG was selected ahead of the competition due to its price (half that of the nearest alternative), reusability of scripts, speed of test development and real-time support.”

To ensure that the benefits afforded by XJTAG are available through the prototyping stage and into production, nCipher has licensed XJRunner – a production-optimised version of the XJTAG System – for use by its contract manufacturing partner, Hansatech, at its facility at Kings Lynn, England.

Tim Murrell, senior electronics engineer for Hansatech Limited, said: “XJTAG represents the biggest single step in test diagnostics that I have seen in years. It is an extremely versatile and flexible boundary scan solution, which, unlike some JTAG test products, integrates seamlessly with other test equipment. It will enable us to significantly improve the yield for the nCipher HSM prototype batches and early production runs”.

With XJTAG, we have a modern, flexible solution that can test a high proportion of the circuit including JTAG and non-JTAG devices. It enables us to test and debug our boards in days as opposed to weeks, run connection tests and port device-centric test scripts across different products – saving valuable development time. XJTAG also allows us to test and program flash chips in a fraction of the time it took us previously.

Nature of business: Provider of cryptographic IT security solutions 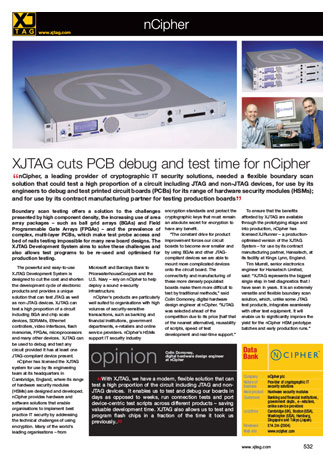