Quadient® uses XJTAG boundary scan in R&D and Production to test, program, and debug the main SoC-based board used in its franking machines and inserters. The XJTAG system has cut programming times by two thirds and extended the board’s test coverage, leading to reduced manufacturing costs.

“The main boards in our franking machines and inserters use a BGA SoC,” explains Ms Bénédicte N., Quadient’s Electronics Department Manager. “XJTAG boundary scan gives us an efficient way to test the board, including its memories, ADC and standard interfaces. It increased our board’s test coverage, giving us better production yield; and the ultra-fast in-system programming tool saves a lot of manufacturing time.”

Checking assembled boards for soldering problems such as shorts or open circuits can be difficult when BGAs are used because the solder balls aren’t accessible to external test equipment. XJTAG boundary scan solves this problem by using the pins of JTAG devices as virtual test points, facilitating a board test that can check a BGA’s solder connections. On Quadient’s main PCBA, the System-on-Chip IC is JTAG-enabled as well as being packaged as a BGA, so boundary scan was the obvious test method for Quadient’s engineers to choose.

In addition to deploying XJTAG boundary scan in production, Quadient also uses it within its R&D team. They found the ultra-fast programming capability provided significant time savings during software development and debugging, when memories need to be frequently re-flashed with new images. “It cut the flash programming time to one third of what it would be with standard programmers,” Bénédicte N. comments.

“It’s also a great tool for hardware debugging,” she adds. “It’s so easy to understand the results it generates.” Test failures are clearly described – for example, by naming any nets that appear to be shorted or pins that seem open circuit; and the results can include hyperlinks that jump straight to schematic and layout viewers with the relevant point highlighted, greatly simplifying the debug process.

Quadient’s manufacturer was already familiar with the XJTAG tools, and Quadient was impressed by the positive feedback from other XJTAG clients. “There were several reasons why we selected XJTAG”, Ms N. says. “We particularly liked the friendly graphical interface, the tool’s ability to test BGA ICs, and the flexibility to use a network licence.”

When testing the board’s non-JTAG devices, XJTAG boundary scan uses scripts written in the XJEase language. The test development library comes with files for many common devices, bus protocols, communication interfaces, and mathematical functions. Users are free to view, reuse, and edit the code from those files, allowing engineers to use the XJTAG ones as the basis of their own. Bénédicte N. commented, “We found it very straightforward to use XJEase. The programming language made it easy to write new tests and to reuse existing ones.”

XJTAG cut the flash programming time to one third of what it would be with standard programmers.

We particularly liked the friendly graphical interface, the tool’s ability to test BGA ICs, and the flexibility to use a network licence.

The programming language made it easy to write new tests and to reuse existing ones.

Customers: Enterprises, medium, and small businesses in most industries 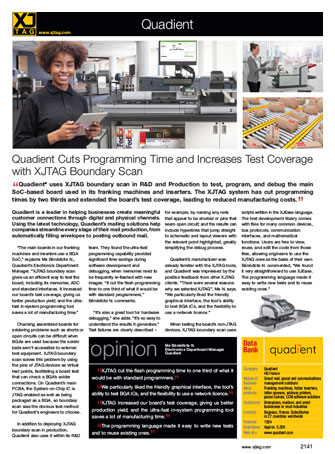