Syntech Technologies, a contract manufacturer of high-quality professional products, selected XJTAG as the best-value boundary scan system to quickly verify connectivity for production boards. Having achieved this goal, Syntech is also now using XJTAG to support its engineering services, which include prototyping as well as design for test.”

To maximise efficiency and productivity, Syntech sought a fast way of screening boards to identify defects such as shorts, opens or component failures before beginning the functional test routine. Checking the connectivity of a complex board can take several hours using manual techniques, so Syntech’s engineers decided to use boundary can testing to achieve their goal.

“XJTAG delivered the best value among the boundary scan systems we evaluated, offering all the features we required with very good technical support”, confirms Syntech’s Shane Bovey. “The system is fast and easy to use, and not only enables effective screening but also helps achieve higher test coverage than is possible using functional test alone.”

Writing boundary scan tests for XJTAG is fast and uncomplicated thanks to XJTAG’s high-level language, XJEase. “XJEase code is easy to write,” agrees Shane Bovey. “In addition, the tests are device-centric and so can be re-used on different boards.”

XJTAG performs functions including interconnect testing as well as in-system programming, and handling serial numbers. It can also pinpoint the locations of discovered faults, which helps to simplify and speed up board repairs.

“The system allows us to test devices that are not connected to the boundary scan chain by taking advantage of connections from JTAG components like FPGAs to non-JTAG devices such as memories, temperature sensors or satellite tuners. This increases test coverage and provides a high level of confidence that each board has the correct connectivity.”

When completed, the tests are exported to the XJRunner system, which tests the production boards on the factory floor. XJRunner is an economical multi-seat XJTAG system, which is optimised for production use and provides run-time capabilities. XJTAG has become an integral part of Syntech’s test strategy, and is able to communicate test results to a central database for product history tracking.

In addition to successful use in production, Syntech is also using XJTAG to support its engineering services. “We can verify and debug designs using the test-development system, even before hardware is ready, and quickly create tests for pre-production units”, explains Shane Bovey. “We chose XJTAG primarily to help speed up production testing. It now supports our entire development path, from pre-hardware to full production.”

XJTAG delivered the best value among available boundary scan systems, offering all the features we required and very good technical support. We are using XJTAG throughout our entire development path, from pre-hardware to full production.

Tests are easy to write and can also be re-used on different boards. We can test many types of non-JTAG devices that are not directly connected to the boundary scan chain, pinpoint the locations of faults to speed up repair, program devices on board, and manage serial numbers. The system also integrates well with our other test equipment to help maximise test coverage.

Nature of business: Market-leading volume Contract Electronic Manufacturer in the UK, specialising in RF and microwave assembly and test 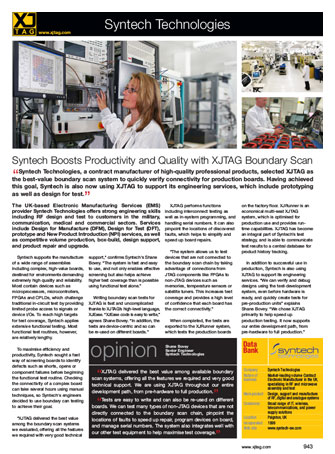