Westinghouse Rail Systems is one of the world’s foremost developers of advanced integrated signalling and control systems for main line and mass transit railways. Its products are at the heart of major railway and metro networks globally, with current projects including both major refurbishment programmes, such as the London Underground Victoria Line upgrade, and complex new infrastructure schemes, including the Canada Line Rapid Transit Project in Vancouver.

The company’s 140-year heritage is founded on delivering advanced signalling solutions to exacting safety and reliability standards, within demanding timescales, and on budget. To ensure the safety of rail passengers, who rely on Westinghouse signalling solutions, its engineers prioritise stringent testing from design and development through to production and implementation.

The XJTAG development system is a cost-effective, ‘out-of-the-box’ solution for debugging, testing and programming electronic assemblies and systems throughout the product lifecycle. XJTAG reduces the time and cost of board development and prototyping by allowing early test development, early design validation of CAD netlists, fast generation of functional tests and test re-use across circuits using the same devices.

Jeff Smith, hardware engineer, R&D, Westinghouse Rail Systems, explains, “We selected XJTAG ahead of competitive products for its ease-of-use, graphical user interface, extensive library of functional tests, and low cost of ownership. These advantages create a powerful boundary scan system that enables us to thoroughly check the integrity of our prototype designs”.

“XJTAG has a powerful range of functions that allow us, for example, to control devices from the inside and regain visibility of all the hidden BGA interconnects in the JTAG chain. We can also read or write pins and busses with a single click using XJAnalyser”, adds Jeff Smith.

The XJTAG Professional system also includes the XJIO expansion board, which supports power-rail testing as well as features to save engineers implementing loopbacks or costly custom test jigs. “By using the XJIO expansion board we can verify signals right through to the backplane connectors of the boards”, says Jeff Smith. “This is a very useful feature for our engineers and has helped to us improve the overall test coverage across our control PCBs.”

The XJTAG boundary scan system is a ‘must-have’ tool for any company developing high value, high complexity, BGA-populated boards. The powerful system is easy-to-use, flexible, contains an extensive library of re-usable functional tests, and, importantly, enables hardware verification to take place without the need to develop specific test software to run on the target board. This has brought an end to the classic arguments between hardware and software engineers blaming each other when a new design does not work.

Nature of business: Supplier of signalling and control technology for main line and mass transit railways 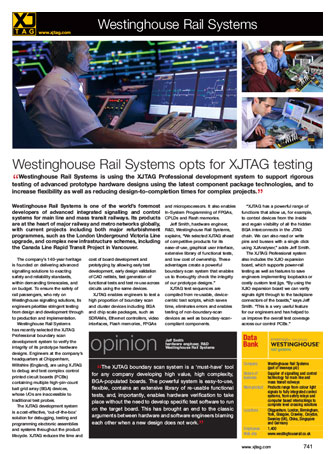