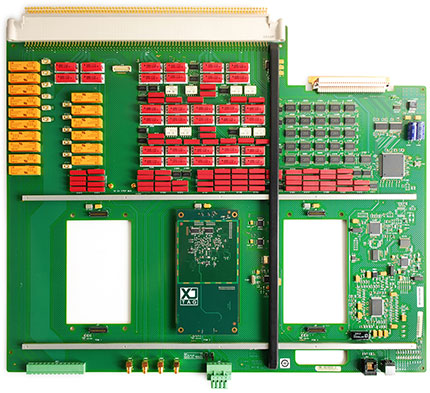 Capturing defects is easier than ever with the combination of XJTAG’s advanced connection test and non-JTAG device testing/programming with the i3070’s measurement capabilities. The XJLink2-3070 is fully compatible with other types of XJLink2 controller from XJTAG, so identical tests can be run in the i3070 as on another unit on a test bench.

The XJLink2-3070 has variable signal slew rate and drive strength so it can handle boards either with or without signal termination. Advanced auto-skew control enables use of the JTAG chain at the maximum frequency, while the configurable voltage levels allow direct connection to most JTAG chains.

The interface of the XJLink2-3070 is completely configurable and can be used for more than JTAG. In addition, I²C, SPI and other manufacturer-specific protocols can be driven as part of test and programming operations.

The XJLink2-3070’s capability to combine test and programming allows a reduction in the number of stages and handling operations on a production line. It is also possible to use JTAG to program devices while performing ICT to increase throughput.

Programming speeds close to the theoretical maximum of a device can be achieved using the advanced features of the XJLink2-3070.

The XJLink2-3070 can contain an XJTAG software licence, allowing stand-alone operation without the need for additional dongles or network access. Alternatively, the system can be licensed from a network server allowing the maximum use of your XJTAG products without having to move licensed hardware between machines.

XJLink2-3070 is developed in collaboration with Keysight Technologies.