Advance Tech Communications has created one of the first truly convergent handheld multimedia devices, and chose XJTAG as the only test solution compatible with its high complexity features, and the demand for rapid test development to be sure of being first to market.

Advance Tech Communications, based in Malaysia, introduced its M.A.G.I.C.Shiv1 Mobile Advanced Global Integrated Communicator at the 2008 CES Show in Las Vegas. Regarded by some mobile operators as the first truly convergent multimedia devices, M.A.G.I.C.Shiv1 combines a powerful laptop computer and mobile phone within a handheld form factor, including features such as high-definition audio, Bluetooth, Wi-Fi and GPS. It has two independent touchscreens for smartphone/PDA and laptop-PC functions, as well as two digital cameras to support functions such as multimedia messaging, webcam or teleconferencing in the smartphone or laptop modes.

Advance Tech has used System-on-Silicon (SoS) and Multi-Chip Module (MCM) technologies to pack this powerful and diverse functionality within overall dimensions of 125mm x 70mm x 32mm. The PCB is as dense as M.A.G.I.C.Shiv1’s features are rich, and adequate test coverage is not possible using conventional probe-based testers alone. To overcome the testability challenges, the Advance Tech team decided to use boundary scan from early development all the way to full production. “We chose XJTAG because it has many features making test development faster and easier” explains CP Loi, CEO, Advance Tech Communications. “It was vital for us to be first to deliver true mobile convergent devices to the market.”

Among XJTAG features promoting ease of use for Advance Tech engineers, the latest version includes drag and drop functions within the XJDeveloper graphical environment, as well as automatic scan-chain detection. “Getting started is quick and easy. XJTAG’s embedded DFT feature identifies untested pins and nets with one click, and this allowed us to work on improving testability even before first hardware was built,” adds CP Loi. “Programming boundary scan tests is also intuitive, using the XJEase language. Because XJTAG tests are device-centric, we can combine custom-written tests for our own devices with downloadable scripts for standard components. We solved most testability challenges before committing to hardware, and were ready with well-developed tests as soon as the first prototypes were available.”

Into Production and the Future

As M.A.G.I.C.Shiv1 has progressed through development and into production, the team has been able to take tests developed early in the project and develop these into full production tests. “Total product reliability is extremely important for our brand, so we do a combination of boundary scan, functional and connectivity tests on each unit built. Using XJTAG to co-ordinate these different routines saved time normally spent building a test executive using a third-party test-development environment. XJTAG engineers helped us build a full automated test solution, which proved to be fast, repeatable and very user friendly.” In the boundary scan tests, XJTAG features such as advanced connectivity testing help debug individual boards by pinpointing the location and nature of faults detected. Advance Tech is also using XJTAG to download the boot loader code and OS runtime image for M.A.G.I.C.Shiv1.

We chose XJTAG over other systems for its many features making test development faster and easier. Getting started is quick and easy. XJTAG’s embedded DFT feature identifies untested pins and nets with one click. Programming boundary scan tests is also intuitive, using the XJEase language. We solved most testability challenges before committing to hardware, and were ready with well-developed tests as soon as the first prototypes were available.

As a platform-independent test solution enabling easy re-use of device tests, XJTAG will play a central role in our test strategies for future advanced products. 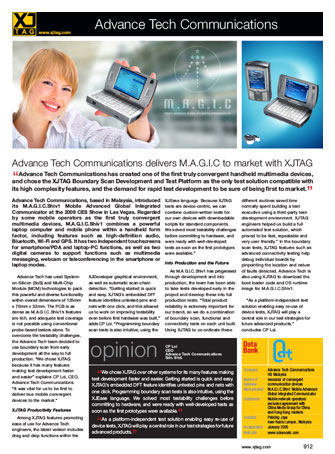