To bring its PXS2 protocol exchange server for high-speed WAN connectivity to market quickly, Advanced Relay Corporation of Eugene, Oregon, USA chose XJTAG boundary scan for its speed, flexibility and ease of use, so benefiting from high productivity, high test coverage, and cost savings throughout the development and production phases.

Advanced Relay builds wide-area data communication equipment for business applications such as financial services, telecommunications, weather mapping, air traffic control and library information systems. Its products include the PXS range of protocol exchange servers, which can perform telecom switching or data-line monitoring roles, and can be used to interface between IP-based networks and legacy standards such as X.25.

“XJTAG was very valuable during the initial stages of product development. It helped us to debug early prototypes quickly,” confirms Ulrich Richers, Director of Technical Marketing. “The system gives tremendous flexibility. It’s great to be able to design our own tests, for example, driving the components directly. Test scripts for devices like SRAMs or Ethernet chips can be downloaded directly from the XJTAG website, and we are able to modify these to suit our own requirements.”

XJTAG’s high-level test description language, XJEase, is central to this flexibility. “We were easily able to understand and use XJEase,” agrees Ulrich Richers. Combined with XJTAG’s built-in functions, such as the netlist explorer and automatic routines such as connection and memory tests, XJEase also enabled Advanced Relay engineers to achieve the desired testability and helped to speed the PXS2’s transition from development into production.

“By providing our manufacturing partner with the XJRunner system, we have established a fast and efficient test regime without having to buy expensive custom equipment,” he continues. “Any boards that fail built-in self test are transferred to XJRunner for further analysis and diagnostics.” To test a failed unit the card is connected to XJRunner and a loopback connector is attached, power is applied, and the boundary scan test is started. “The setup sequence is easy and requires little training. The production tests are based on those we created during product development, which trimmed time and cost from test engineering.”

XJRunner first performs an automatic connection test, checking for open circuits, short circuits, and missing or improper connections. A high proportion of nets can be covered this way. Subsequently components such as the SDRAM memory, CPLD, and multiprotocol interface chip are tested. The Ethernet chip, crystal, watchdog timer, master clock oscillator, and Flash memory are also tested, as well as the board’s LEDs and main connector. XJRunner generates a report showing the locations of any failures. “Although relatively few units are sent for testing by XJRunner, the system has delivered tangible financial savings by allowing reprogramming of components such as Flash memories in situ, without replacing the device.”

“We have received outstanding technical support from XJTAG throughout the project, and are now developing further products, such as our new USB-to-sync adapter, using XJTAG to maximise testability and shorten development time,” he concludes.

XJTAG was very valuable during the initial stages of product development. It’s great to be able to design our own tests, driving the components directly. Test scripts for devices like SRAMs or Ethernet chips are available from the XJTAG website, and the high-level test description language, XJEase, enables us to modify these to suit our own requirements.

For production, XJRunner has helped us implement a fast and efficient production test regime without investing a large amount in custom test equipment. Our manufacturing partner is using XJRunner to diagnose and rework any failed boards quickly and efficiently. 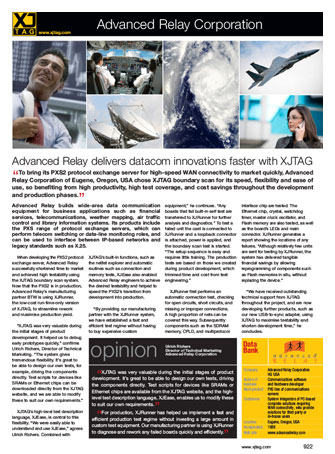