XJQuad is a 4-port version of the XJLink2 USB-to-JTAG controller targeted at PCB manufacturers. It is supplied with XJRunner software for running XJDeveloper test systems. With a range of special features it is particularly suitable for concurrent/parallel testing on the production line. Each of the four ports has a high-speed interface which can be connected to up to four JTAG chains on each Unit Under Test (UUT).

In one package, you have connection testing, in-system programming, non-JTAG device testing, serial number handling and configurable log files for your audit trail, ready to test up to four boards simultaneously.

A simple cable assembly is all that is required to connect to up to four TAPs on each target board. The 20-way connectors of the XJQuad are configurable in your test system so that no further adapters are needed. The ability to change the pinmap for the JTAG signals simplifies the process of connecting your XJTAG test system to the Unit Under Test.

XJQuad can be configured to work in the best way with your board. If there are signal termination issues, they can be overcome by selecting an appropriate drive strength and slew rate. Configurable voltage levels allow you to connect directly to most TAPs while the advanced automatic skew control enables you to get the maximum frequency out of your JTAG chain and cable.

XJRunner tests are loaded from a single encrypted file that contains a compressed version of the XJDeveloper test system created by your design or test engineers. This means that your tests cannot be changed in the production environment. The consistency that this ensures for your testing process can be seen when reviewing the configurable log files that can be produced whenever you test a board.

Each operator can have a separate login. This allows you to restrict each operator’s access to the XJRunner features they have been trained to use; it can also be used to identify the operator for audit.

XJQuad gives you the flexibility of testing up to four boards simultaneously or using the ports independently by continuously unplugging one board that has finished testing and plugging in a new one whilst tests are still running on the other ports.

After a faulty board has been identified on the production line with a default set of Pass/Fail tests, advanced users can then pinpoint faults by running additional tests and debug procedures. They can also choose to run a particular test, or set of tests, a number of times, or even run a test continuously to help diagnose particularly tricky or intermittent problems on a board.

XJRunner also provides statistics on the percentage of boards that have passed/failed as well as Fault Trend Analysis, highlighting tests prone to failure. 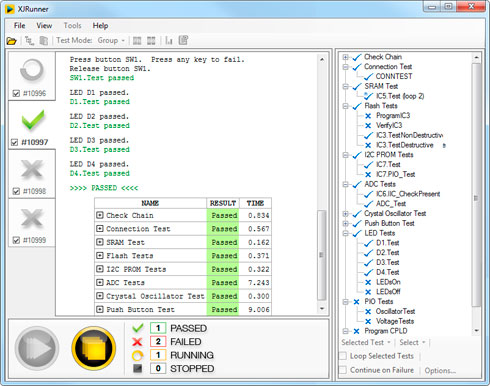 The Layout Viewer lets you quickly find any component, pin or net in your circuit when trying to pinpoint a fault. In order to use the Layout Viewer you’ll need to use ODB++ when developing the project or the target system. 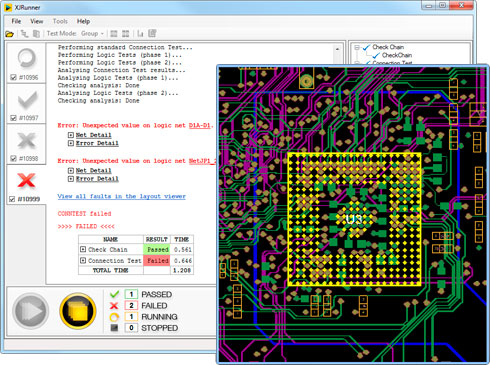 Your test system where you want it

The XJQuad contains the licence for your XJTAG system. This allows you to easily move your licences around for maximum flexibility and also means you are not tied to one PC to do your XJTAG testing.

XJRunner can also program and log serial numbers, or other forms of identification such as MAC addresses. These can be generated by XJRunner, taken from the packaged XJDeveloper system, or be input directly (e.g. from a bar code reader).