Integrate XJTAG with your test system

XJTAG can be integrated with other test systems and environments at a software level, hardware level, or both.

These integration capabilities give the user flexibility, allowing them to design the type of overall test system they want. XJTAG can either be used in a way that best suits an existing environment, or it can be used as the basis of a test system that then integrates with other test equipment.

The standard interface for running XJTAG tests is XJRunner, an easy to use, graphical run-time environment. However, these JTAG boundary scan based tests can also be integrated into many other test executives and run from them by using the XJIntegration API. This interface gives other software access to the functionality of both XJRunner and XJAnalyser.

Whether you’ve written bespoke code in something like C# or Python, created tests in applications like LabVIEW, LabWindows/CVI, or ATEasy, or organised them in test executives such as TestStand, integration with them all is supported.

Integrating XJTAG boundary scan into LabVIEW-based test systems is easy, thanks to the full set of XJTAG Virtual Instruments (VIs) that is freely available.

XJTAG tests can also be run as part of a CVI test system using the supplied .NET standard windows programming interface. Integration with LabWindows/CVI from National Instruments is fully supported.

XJIntegration can be used in applications created using frameworks that provide access to .NET assemblies. It can therefore be used by applications developed within ATEasy from Marvin Test Solutions and similar programs. 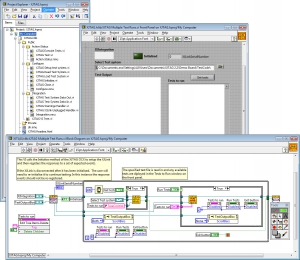 A full set of TestStand sequences (based on XJIntegration) is freely available, making it quick and easy to integrate XJTAG testing into your TestStand system.

XJTAG boundary scan tests can be run from Python code and .NET framework apps written in C# or other languages, giving your programs access to the functionality of XJRunner and XJAnalyser.

In particular, integrations with SPEA’s Leonardo system, Takaya’s APT-1400F software, and Keysight’s BTBasic environment allow a high degree of interaction between XJTAG and the other test system.

XJRun (the command-line version of XJRunner) is the part of the XJTAG Development System that allows other software to run XJTAG tests via a command line call.

XJRun can be configured to run any individual test or group of tests within an XJTAG test setup. XJRun returns a value that can be used as a simple pass/fail result or as a way to pass more informative error codes to the caller, depending on the control software’s capabilities.

XJTAG can also be physically integrated into various other test equipment, such as ICT machines, to create fully integrated test stations.

There are many types of Automated Test Equipment (ATE) machines and there are many levels at which they may be integrated with XJTAG. Integration with ATE machines may be in hardware, software or both.

The main ATE methodologies are the following:

XJTAG has hardware integration with several ICT and FPT vendors, in which a customised JTAG controller card can be inserted inside a larger ICT or FPT machine, usually in an expansion module slot. With most of these vendors there is also some software integration, allowing one system to call the other to carry out tests, or giving the ability to carry out fully integrated testing where a signal can be driven from one system and read from another, and allowing XJTAG to control flying probe locations during integrated testing.

Even where no specific software integration exists, XJTAG can usually achieve some integration with other test equipment simply because most systems can run external programs. Other systems can therefore use XJTAG’s XJRun command line program to run tests and receive results back. Equally, XJTAG can also call external programs and read their results, or it can load other vendors’ .NET DLLs in order to run test functions directly from them.

XJTAG currently has integration solutions for:

If you have questions about how you might integrate XJTAG into your test system, or you are using an ATE equipment vendor which you think we might be able to integrate with, please contact us.