Bluegiga, a company that delivers value for customers by creating wireless solutions that are quick and easy to use and offer high functionality, has driven similar benefits into its own design and manufacturing by adopting XJTAG boundary scan to test its turnkey Bluetooth radio systems.

Bluegiga Technologies Oy is a producer of Bluetooth radio modules, Bluetooth evaluation kits and Bluetooth access points, as well as supporting software solutions. The company’s customers are usually small- or medium-volume OEMs building products such as telemedicine equipment or local marketing systems, and looking for fast and cost-effective Bluetooth solutions without design risks or certification costs.

Bluegiga single-board modules may have as many as three Bluetooth radios, alongside Ethernet, WLAN and 3G/GPRS modems. Some components are BGA devices, which are difficult to access using conventional test equipment. The company’s engineers began using boundary scan testing to overcome this challenge, but are now also testing other components such as SDRAM, Flash and the real-time clock. “XJTAG offered the best value as a solution for testing BGA devices, but its ease of use and flexibility encouraged us to go further,” says Reidar Gjerstad, hardware designer and project manager. “In addition to testing the digital circuitry, we are also able to test power supplies with the aid of A/D converters. This is important since some of our designs have as many as six voltage levels.”

“XJTAG has successfully reduced the time to debug boards, and helps us discover faults at an early stage,” he continues. “This helps when testing new boards arriving from our manufacturing partner, and we also use it to test any boards returned from customers. XJTAG saves the tedious process of debugging using the main CPU, which in any case is not possible if the CPU does not start.”

Bluegiga is also using XJTAG to drive yield improvement, and expects to gain further advantages now that its manufacturing partner has also adopted the system. “Our subcontractor will test every board after soldering, and before firmware upload, using its own XJRunner system. We expect yield to increase, leading to a lower cost per unit,” explains Reidar Gjerstad. “Further advantages of carrying out XJTAG tests immediately after assembly include improved efficiency by isolating faulty boards before uploading firmware.”

XJRunner is a run-time-only version of the XJTAG Professional system, which not only allows companies to acquire multiple boundary scan seats at a competitive price but also enables OEMs and their manufacturing partners to work more efficiently using a common boundary scan platform. “Since both companies are using XJTAG, we are able to create tests in-house and upload them to our subcontractor to be used immediately in production.”

XJTAG has quickly become an integral part of Bluegiga’s production and test strategies, aided, says Reidar Gjerstad, by facilities such as the demonstration board and help files with tutorials showing how to get the best from boundary scan. “XJTAG has also provided technical support including advice on increasing test coverage and help to create the first set of test scripts for one of our boards. We only had to provide the netlist and a searchable PDF schematic, and our test system was up and running in less than one hour. XJTAG has helped us get much more from boundary scan than we originally expected.”

XJTAG offered the best value as a solution for testing BGA devices, but its ease of use and flexibility encouraged us to go further. In addition to testing much of the digital circuitry, we are also able to test power supplies with the aid of A/D converters.

Using this system we have successfully reduced the time to debug boards, and with XJTAG’s help to create the first set of test scripts for our boards our first tests were up and running in less than one hour.

XJTAG has helped us get much more from boundary scan than we originally expected. 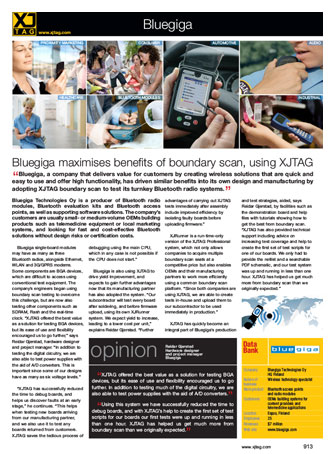