Cambridge Broadband, a fixed wireless access solutions provider, needed a boundary scan test solution that was fast, versatile, easy-to-use and portable, for use by its engineers for debug and testing early prototypes; by its contract manufacturing partners for production testing.

Board designers and test engineers will be familiar with the challenges of testing and debugging boards featuring fine pitch BGA components. Without access to BGA interconnects hidden under the component, the developer’s trusty oscilloscope and logic analyser can offer little help. However, the ability to debug a design at an early stage is crucial to success. The XJTAG Development System aims to solve these challenges and also allows test programs to be re-used and optimised for production testing and field service activities.

The powerful and easy-to-use XJTAG Development System is designed to cut the cost and shorten the development cycle of electronic products and provides a unique solution that can test JTAG as well as non-JTAG devices. XJTAG can test a high proportion of a circuit including BGA and chip scale devices, SDRAMs, Ethernet controllers, video interfaces, flash memories, FPGAs (Field Programmable Gate Arrays), microprocessors and many other devices. XJTAG also enables In-System Programming of FPGAs, CPLDs (Complex Programmable Logic Devices) and flash memories.

An active member of the WiMAX Forum™, Cambridge Broadband has pioneered the development of carrier-class, point-to-multipoint broadband wireless access equipment for network operators wishing to deploy high-capacity, multi-service networks. The company is focused on delivering high quality multi-service networks with the best price-performance in the licensed band worldwide.

Speed of deployment of its boards and systems into the market place is its key competitive advantage and this prompted the supplier to sign a multiple licence agreement to make the XJTAG Development System available in key global locations including the UK, China and Malaysia. The System is being used by Cambridge Broadband’s contract manufacturing partner, Benchmark Electronics, for testing production boards.

The sales success of Cambridge Broadband’s VectaStar system – which is being increasingly adopted by network operators as an alternative broadband access solution providing data rates up to 1.2 Gbps with guaranteed quality of service – means that there are already thousands of units and printed circuit boards deployed globally. With 20 different boards in its portfolio and lots of new development in the pipeline, its engineers needed a solution that could be used at various stages in the product lifecycle.

“Speed of deployment of our VectaStar system is our key competitive advantage so it was important that we adopted a test solution that was fast, versatile, easy-to-use and portable. It also had to be able to test BGA devices”, added Alistair Massarella. “What’s great about XJTAG is its ability to test JTAG and non-JTAG devices – our boards are a mixture of both – and perhaps, most importantly, is the fact that XJTAG test scripts are reusable and portable across different boards which saves our engineers so much time.”

We assessed the solutions from several leading boundary scan test suppliers and opted for the XJTAG Development System because of its price, reusability of scripts and its ‘unbeatable’ speed of test development. Using XJTAG we can now test and debug our boards in days as opposed to weeks and we don’t need dedicated people. This product has transformed our test regime, our designers are now JTAG aware and we are getting our boards into the field far more quickly than before. 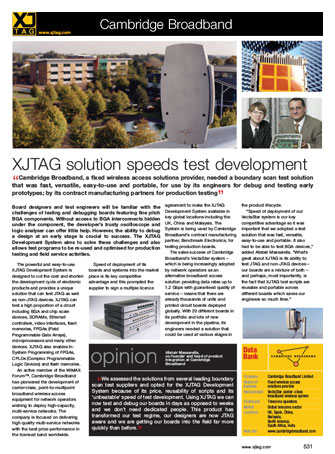