Familiar with the advantages of boundary scan, but frustrated by the limitations of well-known JTAG test systems, engineers at industrial-technology giant Eaton have switched to XJTAG. XJTAG is fast and easy to learn, provides convenient project setup features, allows control over test code, and enables integration with production test equipment.

Eaton is a multi-billion dollar diversified power management company with global presence and a history of innovation dating back to 1911. Today, as a leader in power management products and services, Eaton has in-house electronics competencies covering areas such as industrial controls, metering, motor protection and communications.

A test engineering team at Eaton, led by Test Engineering Manager James Diem, has over a decade of experience testing prototypes and production assemblies using boundary scan equipment. Boundary scan provides a fast and effective means of testing devices like DSPs, microprocessors, FPGAs and memories in surface-mount packages such as Ball Grid Array (BGA). “Boundary scan testing can be highly effective, especially if device pins are inaccessible, but even well-known test systems can be difficult to use and do not easily allow updating of tests or integration with a third-party test program”, says James Diem.

“We found the solution to such challenges after one of our design engineers saw XJTAG being demonstrated at a trade exposition, and told us how easy it can be to create applications, generate tests, and subsequently modify test code.

“XJTAG has features that are vastly superior to other systems I know. The learning curve for new users is dramatically shorter; one training session with XJTAG gave me enough knowledge to start developing simple programs. Now, I can create a complete test for a new board in a matter of days, whereas other systems can require weeks of work. I particularly like the BOM and CAD import features, the ‘Categorize Devices’ screen and the pin-mapping capability, which simplify initial test generation.

“Unlike other systems, XJTAG makes it easy to ‘get underneath the hood’ to update programs, and also provides example tests that help engineers learn how to get the best from boundary scan.”

James Diem also praises other features of XJTAG, such as its convenient ‘floating’ license, the large and growing library of tests for standard parts, and the high level of customer service provided. “When I ask questions I have complete confidence that my requests are understood and that I will receive the answers I need”, he comments.

Eaton is using XJTAG for testing prototype and production assemblies. For production, XJTAG is integrated directly into systems running tests that are written in C for Virtual Instruments (CVI). The boundary scan programs are first developed using XJTAG’s XJDeveloper environment and then embedded into CVI. Engineers are using XJTAG for tasks such as extending test coverage to include parts connected to the boundary scan chain such as switches, potentiometers, LEDs or logic devices, programming microprocessors in situ, and extra testing of production boards undergoing functional test.

James Diem sums up, “We have been working with XJTAG for over a year now, and I can say that it matches or exceeds the capabilities of our previous system in every respect”.

XJTAG has features that are vastly superior to other systems I know. The learning curve for new users is dramatically shorter.

I can create a complete test for a new board in a matter of days. The BOM and CAD import features, the “Categorize Devices” screen and the pin-mapping capability simplify initial test generation. Unlike other systems, XJTAG makes it easy to ‘get underneath the hood’ to update programs.

We have been working with XJTAG for over a year now, and I can say that it does everything as well as or better than our previous system. 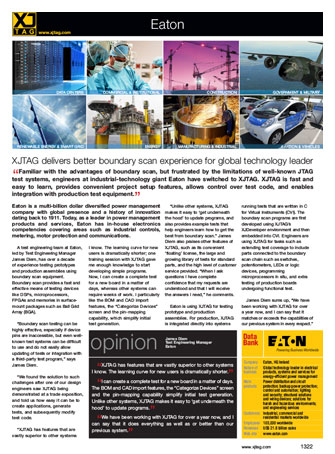