The ground station systems perform functions such as signal processing, communication and networking, and use high-performance servers featuring PCI cards designed by Spacetec’s electronic engineering team. The server cards use high-bandwidth standards such as PCI-X and PCI Express, and include multiple high-performance processors, FPGAs, and high-speed FIFOs and RAMs. The boards are extremely complex and densely populated, and present tough test challenges from the beginning of design through to final production. Many of the devices are housed in BGA or chip-scale packages that cannot be probed or visually inspected.

“We are using boundary scan tools early in the design phase to assess the testability of our boards, and to help with any design changes necessary to reach our test coverage targets”, explains Øyvind Undstad, one of Spacetec’s electronic designers. “The XJTAG system provides the capabilities we need at a very competitive price, and is very easy to use. Initially, the time to get the system up and running, and performing productive tests, was a matter of hours; other systems can require a few days’ effort.”

The XJTAG boundary scan system provides many features that help speed up test preparation, including XJDeveloper, a graphical application providing a simple-to-use interface, automatic scan-chain detection, and a large library of tests for standard parts. XJTAG’s high-level test description language, XJEase, delivers the flexibility of a programming language, such as loops, variables and flow control, for engineers developing device and circuit tests. Tests can also be re-used in subsequent projects, since device tests written in XJEase are independent of the specific circuit under test.

“XJTAG helps us assess each design at an early stage, by supporting design verification and DFT analysis”, continues Øyvind Undstad. The built-in Design For test (DFT) feature allows engineers to see the board’s test coverage, while the advanced connection test helps pinpoint errors and is able to test a higher percentage of the circuit than most other JTAG systems.

XJTAG is also in action at Spacetec’s manufacturing partner, Noca AS, which has several XJRunner stations on its production lines. Øyvind Undstad explains, “We provide boundary scan tests for the Noca team to use directly on XJRunner. These include interconnection tests, RAM tests, and simple functional testing of non-JTAG components, as well as programming of Flash memory. Most assembly defects can be identified at manufacture and repaired immediately. This avoids having the boards shipped back to us for fault finding by our engineers, which saves valuable time and helps increase productivity.”

XJTAG helps us to assess our designs and reach high targets for test coverage. The XJTAG system provides the capabilities we need at a very competitive price, and is very easy to use. After taking delivery, we were performing productive tests within a matter of hours.

Our manufacturing partner is using the XJRunner system, which can run the tests we develop in our labs. This allows most assembly defects to be identified at manufacture and repaired immediately, which saves shipping boards back to us for fault finding. Overall, XJTAG is helping us increase test coverage, quality and productivity. 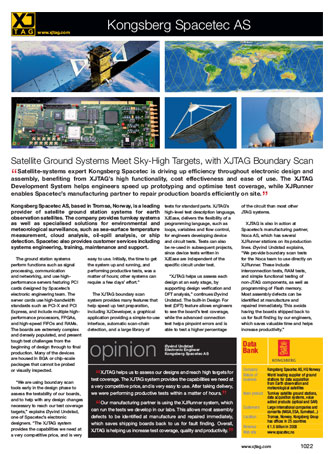