Because leading-edge cellular standards such as LTE evolve quickly and continuously, board designers tend to use large numbers of FPGAs to ensure the flexibility they need to update hardware in response to changes. However, large numbers of FPGAs present difficult board-test challenges during development and in production. To maximise test coverage for its FPGA-based boards, Signalion is using XJTAG boundary scan during initial hardware bring-up when developing LTE test systems.

“We started to use XJTAG to test the connections to FPGAs in BGA packages, but we are now also using it to test SDRAM and FLASH memories, and to emulate bus signals to extend test coverage to many other devices such as A/D and D/A converters connected to the FPGAs”, explains Jens Weis, Head of Hardware and RF Development at Signalion. “We can also read and check many analogue signals on the board, and test Ethernet PHY chips.”

The FPGAs and associated configuration-FLASH memories, as well as devices such as Ethernet PHYs, are connected to the JTAG chain, which allows all the I/O pins to be monitored using boundary scan. In addition, XJTAG provides easy-to-use tools for simulating bus signals, which simplifies testing of other devices that are connected to the FPGAs but not to the boundary scan chain.

“Without XJTAG, we would have to use the resource of our VHDL group to help develop dedicated test patterns to achieve adequate test coverage”, adds Jens Weis. “XJTAG is a much better solution, because it allows us to generate programs more quickly and achieve higher test coverage. It also frees engineers in our VHDL group to fulfil their main role, which is to implement LTE features for the test systems we deliver to our customers.”

Jens Weis continues by explaining that the technical support behind XJTAG has been another factor helping to speed up development. “We have appreciated the fast response from XJTAG’s engineers in situations where we have been missing the BSDL file to compile a test for a device. We know, also, that we can rely on support if we need help to generate custom tests.”

XJTAG testers are also in action at Signalion’s assembly house, testing production LTE boards using programs derived efficiently from the tests used in development. “When the boards are delivered back to us, we use XJTAG as a final inspection tool to pinpoint any defects quickly”, adds Jens Weis. “It has become an important part of our strategy to deliver the perfect solution to our customers every time.”

XJTAG is highly effective for testing the connections to FPGAs in BGA packages, and we are also using it to test SDRAM and FLASH memories, and emulate bus signals to extend test coverage to many other devices connected to the FPGAs.

Without XJTAG we would have to use our VHDL group to develop dedicated test patterns, to achieve adequate coverage. XJTAG provides a more effective solution, and also frees engineers to continue improving our products. The system comes with high-quality technical support. XJTAG is an important part of our strategy to deliver the perfect solution to our customers.

Dresden-based Signalion is a provider of prototyping, test, and live-demonstration equipment for the global mobile communications industry. The company’s products include complete test solutions for next-generation 3GPP-LTE wireless infrastructures, which enable leading equipment manufacturers, network operators, test solution providers and R&D departments to test modules from the baseband functionality up to the radio interface. 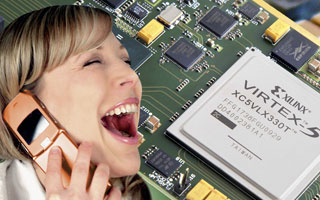