Simpro, based near Trondheim, focuses on building radio and subsea systems for use in highly demanding applications. Assembling mostly small batches of complex circuit boards, the company works actively with its customers to ensure the highest possible test coverage.

Simpro engineers first used boundary scan when working on a particularly complex board, to identify assembly faults with FPGAs in BGA packages. Faults with these packages could not be found using Automatic Optical Inspection (AOI) or functional testing. “Troubleshooting for defects or soldering errors in BGAs is time-consuming and inefficient from our point of view as a subcontractor”, says Ola Melien, Test & Automation Engineer at Simpro. “XJTAG provided a quick and successful solution to this challenge.”

According to Ola Melien, XJTAG is extremely effective for testing not only FPGAs, but also memory chips such as Flash or SRAM, microcontrollers, and even non boundary scan components such as ADCs. “We now offer boundary scan to our customers, in combination with AOI and functional test, to achieve the highest possible test coverage. This can be close to 100% for some boards.”

Simpro tests circuit boards with XJTAG before performing functional tests. “Some boards undergo functional testing after being installed in racks, which can make troubleshooting more difficult and time consuming. Verifying the boards using XJTAG provides a high level of assurance that each board is good.”

“When evaluating the boundary scan test systems on the market, we chose XJTAG because it is the most user friendly and has the best capabilities for testing components that are not connected directly to the boundary scan chain”, he continues.

XJTAG simplifies test development by allowing engineers to set or read values on nets; the system takes on the task of calculating how to drive the boundary scan chain. An easy-to-use graphical application, XJDeveloper, helps quickly set up and run the tests, and provides features such as Advanced Connection Test to quickly locate open or short circuits, automatic DFT analysis to show test coverage achieved, and a netlist explorer to display connectivity between devices. The high-level language, XJEase, simplifies creation of tests for non-JTAG components. These can be re-used throughout the product lifecycle as well as in subsequent projects wherever the same component is used.

“In practice, the support from XJTAG has been more than satisfying”, adds Ola Melien. “Direct access to XJTAG engineers, by telephone as well as in person, has helped us solve project-specific questions and difficult test challenges quickly and efficiently.”

He says the company’s next step is to integrate boundary scan with its functional test environment. XJTAG provides the means to achieve this, including an API providing low-level access to the boundary scan chain, enabling easy integration with other systems.

“XJTAG is not only easy to use and highly effective, but is also flexible enough to evolve with our test strategies as we target continuous improvements in speed and productivity.”

XJTAG provided a quick and successful solution to troubleshooting for defects or soldering errors in BGA devices. The system is more user friendly than most others on the market, and has the best capabilities for testing non boundary scan components. The support from XJTAG, also, has been more than satisfying.

Features allowing easy integration with our other test equipment make the XJTAG system not only easy to use and highly effective, but also flexible enough to evolve with our test strategies as we target continuous improvements in speed and productivity. 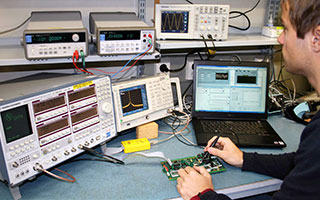