CAMBRIDGE, England, 10 March, 2008 – Curtiss-Wright Controls Embedded Computing, a leading designer and manufacturer of commercial-off-the-shelf (COTS) systems and board level products, has selected the XJTAG boundary scan development system to improve the process of debugging and testing its range of radar, video and graphics products.

The XJTAG system has been utilised by engineers at Curtiss-Wright’s video and graphics group in Letchworth, UK, to debug and test its latest range of highly complex printed circuit boards which feature an increasing number of ball grid array (BGA) devices, including high performance field programmable gate arrays (FPGAs).

Alan McCormick, managing director, Curtiss-Wright’s video and graphics group, said: “We selected the XJTAG system due to its price, the speed and accuracy of fault diagnosis, and because the re-usable device-centric test scripts can be ported from project to project and migrate through design, prototyping to production and beyond.”

“Using XJTAG, we can very quickly debug and test both the boundary scan and cluster devices on our boards many of which are inaccessible to traditional test methods such as flying probes, logic analysers, oscilloscopes and X-ray systems.”

Simon Payne, CEO, XJTAG, said: “We are delighted that Curtiss-Wright, a renowned name in the aerospace and defence market, has selected the XJTAG system to validate its latest range of PCBs, which will form part of larger solutions and be used throughout the world in vehicle, airborne and shipborne command and control consoles, vessel tracking, air traffic control and air defence systems.”

Curtiss-Wright Controls Embedded Computing is the industry’s most comprehensive and experienced single source for embedded solutions, ranging from Processing, Subsystems, Data Communication, DSP, and Video & Graphics to the most advanced board level components and fully integrated custom systems. The Embedded Computing group serves the defense, aerospace, commercial and industrial markets and is part of Curtiss-Wright Controls Inc.

XJTAG is a leading supplier of IEEE Std. 1149.x compliant boundary scan development tools. Its JTAG (Joint Test Action Group) development system offers a highly competitive solution for designers and developers of electronic printed circuit boards and systems. Utilising XJTAG allows the circuit development and manufacturing process to be shortened significantly by facilitating early test development, early design validation, fast development of functional tests and test re-use across circuits that use the same devices. XJTAG is based in Cambridge, UK, and is part of the Cambridge Technology Group (www.cambridgetechgroup.com).

Advances in silicon design, such as increasing device density and, more recently, ball grid array (BGA) and chip scale packaging, have made traditional electronic circuit testing methods hard to use. In order to overcome these problems and others; some of the world’s leading silicon manufacturers combined to form the Joint Test Action Group (JTAG). The findings of this group were used as the basis for the Institute of Electrical and Electronic Engineers (IEEE) standard 1149.1: Standard Test Access Port and Boundary Scan Architecture.

Photography to accompany this news release 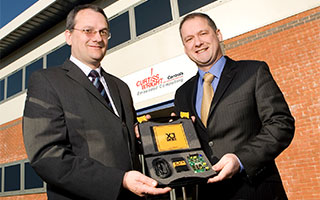