CAMBRIDGE, England, July 10, 2006 – Solarflare Communications, a fabless semiconductor company that provides high-performance Ethernet solutions, has selected the XJTAG boundary scan solution to debug and test its EtherFabric EF1-21022T Network Interface Cards (NICs). The XJTAG system is being used by Solarflare for debugging and testing development boards by its R&D centre in Cambridge, England and for production line testing by its contract manufacturing partner

Engineers at Solarflare’s Cambridge operation (formerly Level 5 Networks) opted for the XJTAG system because it was the only boundary scan product that could exploit the full capability of the JTAG chain to improve the speed and accuracy of fault diagnosis, achieve high test coverage, and migrate through design to production and beyond.

“The XJTAG system is a flexible and cost-effective boundary scan solution that has transformed our test regime and delivered quantifiable benefits throughout the product lifecycle,” said Derek Roberts, VP Hardware Architecture, Solarflare Communications.

“We have been able to consistently get development boards up and running in hours as opposed to days or weeks; flash programming time has been drastically reduced (in one case from 4 hours to 8 minutes); test coverage is well over the 90% mark; and we are making steady improvements to our production line test times. The component-centric test model has allowed us to re-use our test cases across multiple designs (in some cases more than 4 designs), saving a great deal of time.”

Solarflare Communications provides easy-to-use, standards-based, high-performance Ethernet solutions for data centres and enterprise networking. Its EtherFabric breakthrough architecture transforms the performance of Ethernet connections and is the only Ethernet-based performance-enhanced interconnect that maintains 100% binary compatibility with existing standards, while providing easy scalability to 10Gb/sec and beyond.

“Our solutions are designed for use in applications within banks, financial institutions, government bodies and utilities where high-performance networking and product reliability is paramount,” added Derek Roberts. “By using the XJTAG system, we have reduced the overall product development timetable and have improved our production yield, which is good news for customers.”

“Using XJTAG, we have built an automated production line test jig that provides high throughput testing with minimal operator interaction,” added Roberts. “The XJTAG-based jig replaces the high-maintenance functional test fixture and has cut the test time per board from 15 minutes down to around 3. Another benefit of XJTAG and its reusable scripts is that our test engineers can respond to board changes by writing new test code, rather than reworking or redesigning the test fixture.”

XJTAG is designed to cut the cost and shorten the development cycle of electronic products and provides a unique solution that can test JTAG as well as non-JTAG devices. XJTAG can test a high proportion of a circuit including BGA and chip scale devices, SDRAMs, Ethernet controllers, video interfaces, Flash memories, FPGAs, microprocessors and many other devices. XJTAG also enables In-System Programming of FPGAs, CPLDs (Complex Programmable Logic Devices) and Flash memories.

Solarflare Communications is a fabless semiconductor company that provides easy-to-use standards-based, high-performance Ethernet solutions. Headquartered in Irvine, California and with development centres in Cambridge, England and Sunnyvale, California, the companys mission is to be the leading Ethernet company by focusing on cost-effective, high-performance, standards-based Ethernet interconnects for data centres and enterprise networking. 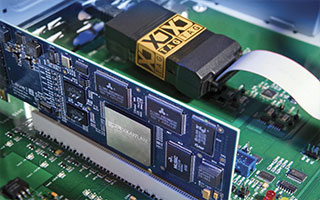