MUNICH, Germany, November 14, 2006 – XJTAG (www.xjtag.com), a leading supplier of boundary scan development tools, has unveiled its XJTAG Professional development system and announced a plethora of enhancements to its award-winning IEEE 1149.1 compliant system – all designed to enable engineers to significantly reduce the time and cost of board development and prototyping.

“The XJTAG system is designed by engineers for engineers and provides a comprehensive set of tools to test, debug and program complex printed circuits containing BGA devices,” said Simon Payne, CEO of XJTAG. “With the Professional system and the new features, board developers will be able to get their circuits up and running in hours as opposed to days/weeks with other systems.”

Test coverage, speed of fault detection and overall usability has been greatly enhanced in the latest version of XJTAG. The interconnect test is now lightning fast and can exercise 5,000 nets in less than a second due to improvements to the sophisticated and mathematically-proven algorithms. It can also identify a higher proportion of faults and, importantly, accurately report their locations.

XJEase has also been enriched in the latest version with extra language features added to make the whole test script writing process more intuitive and natural. In addition, extending the principle of device-centricity which underpins XJEase, test code is now separated from the configuration files making it much easier and quicker to make wholesale changes to test routines.

XJTAG has also added a COM Interface to the system to allow XJTAG to integrate with test executives such as LabVIEW, Visual Basic and other Windows-based custom applications. Other new features include enhancements to XJAnalyser to speed up debugging, and a new XJDemo board, which shows how, using XJEase, engineers can test the analogue elements of their circuits.

The XJTAG system reduces the time and cost of board development and prototyping by facilitating early test development, early design validation of CAD netlists, fast generation of highly functional tests and test re-use across circuits that utilise the same devices. XJTAG enables engineers to test a high proportion of the circuit (both boundary scan and cluster devices) including BGA and chip scale packages, such as SDRAMs, Ethernet controllers, video interfaces, Flash memories, field programmable gate arrays and microprocessors.

XJTAG abstracts engineers from the complexity of the IEE1149.1 standard. It is simple and easy to use, test scripts are written in a C-like programming language, and these scripts are device-centric making them re-usable throughout the product lifecycle from early design and prototyping through to production, field support and repair. XJTAG also enables In-System Programming of FPGAs, CPLDs (Complex Programmable Logic Devices) and Flash memories.

The XJTAG Professional Development System incorporates the following components. XJAnalyser is a powerful tool for circuit visualisation that provides a simple graphical view of the state of all JTAG pins. XJEase is the test description language for manipulating non-JTAG/cluster devices. XJRunner is a production optimised version of the XJTAG Development System, designed specifically for contract manufacturers and production sites.

XJLink is a USB 2.0 hardware module used to connect the computer with the unit under test and contains the XJTAG license, which allows the system to be used on different computers on and off site. XJDemo is a fully populated demonstrator board, with tutorials designed to provide the developer with a rapid understanding of the XJTAG system and how to simulate faults. The XJIO board improves the test coverage for a Unit Under Test (UUT) by verifying the signals right through to the external connections. 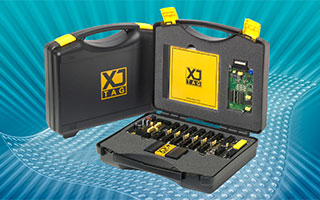