Cambridge, UK, 21 October 2014 — XJTAG, a world leading supplier of boundary scan technology, today announced the release of the XJLink2-CFM and XJLink2-CFMx. The new modules provide Teradyne users with integrated access to XJTAG’s powerful test and programming tools, operating under the control of the TestStation™ test program.

With a JTAG solution installed internally to the TestStation In-Circuit Test System, the complexity and recurring cost impact of fixture-based test can be significantly reduced, while improving overall test coverage.

Integrated Teradyne access will provide you with the following:

This new integrated product enables streamlining of the production line, while also boosting fault coverage, thanks to the combination of XJTAG’s advanced connection test and non-JTAG device testing/programming with Teradyne’s In-Circuit Test capabilities.

The XJLink2-CFM is an advanced multi-TAP JTAG controller that fits into one of four Custom Function Module (CFM) locations on the Teradyne Multi-Function Application Board. A single or multiple XJLink2-CFMs can be added to the same Teradyne card for supplementary test and program capabilities, for instance testing panels of boards. XJLink2-CFMx expander cards are also available to maximize available connectivity from an XJLink2-CFM controller, from a maximum of 8 fixture-connectable signals when just using the XJLink2-CFM, up to 18 signals by adding one, two or three XJLink2-CFMx cards.

The test interface of the XJLink2-CFM is completely configurable allowing support for almost any programming protocol, not just JTAG devices. Programming speeds close to the theoretical maximum of a device can be achieved using the advanced features of the XJLink2-CFM.

The XJLink2-CFM is compatible with the standard USB XJLink2, so boards can be debugged at a repair station without having to develop a separate test setup. “Adding JTAG boundary scan functionality to the Teradyne test platform provides manufacturers with a robust, comprehensive test and programming environment,” says Simon Payne, CEO XJTAG.

Flexible licensing options also aid ease of use – the product can contain an XJTAG software license and allow standalone operation without additional dongles or network access. The system can also be licensed from a network server allowing the maximum use of XJTAG products without having to move licensed hardware between machines.

XJTAG offers a free trial and board setup to new users who are interested in taking an evaluation.
Additional details can be found at www.xjtag.com.

XJTAG is a worldwide leading supplier of IEEE Std. 1149.x compliant boundary scan tools, which focuses on innovative product development and high quality technical support. The company has its headquarters in Cambridge, UK and works closely with over 50 experienced and professional distributors and technology partners across the globe. XJTAG delivers a diverse range of boundary scan test solutions for clients across a wide range of industries, including aerospace, automotive, defence, medical, manufacturing, networking, and telecommunications.

Teradyne (NYSE:TER) is a leading supplier of Automatic Test Equipment used to test semiconductors, wireless products, data storage and complex electronic systems which serve consumer, communications, industrial and government customers. In 2013, Teradyne had sales of $1.43 billion and currently employs approximately 3,800 people worldwide. Teradyne (R) is a registered trademark of Teradyne, Inc. in the U.S. and other countries. The company’s divisions, Semiconductor Test Division, System Test Group, and Wireless Test are organized by the products they develop and deliver. 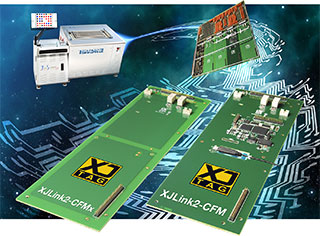