The XJTAG system has been implemented at Prisms 6,500 square foot manufacturing facility in St Ives, England, where it has led to significantly improved production test coverage – up to 98% for certain boards – and it is also being used extensively for new product introductions and prototype verification.

The XJTAG system meets the growing market need for a cost-effective solution for testing printed circuit boards populated with BGA and chip scale devices. Such devices cannot be effectively tested by traditional methods such as flying probes, logic analyzers, oscilloscopes and X-ray systems.

“The XJTAG system offers incredible value, power, performance and flexibility all within one self-contained suite of development tools,” said David Dickin, business development director at Prism. “Unlike other boundary scan products we considered, XJTAG is simple and easy to use, test scripts are written in a C-like programming language familiar to test development engineers, and these scripts are device-centric making them re-usable throughout the product lifecycle.”

Prism offers a wide range of electronics manufacturing services covering the complete product lifecycle, from concept through design, manufacture, test and distribution, to end-of-life. Prism focuses on the production of modest volumes of complex products and prides itself in creating cost-effective individual service and supply chain solutions for customers in a wide range of markets including medical, military, scientific, communications, IT and industrial electronics.

“Its no longer sufficient to test that a BGA device has been soldered correctly, we now need to prove that it is electrically operational too,” continued Richard Walton. “With XJTAG, we can gain access to the boundary scan chain and get an interactive graphical view of all the device pins, and we can read or write pins and busses with a single click to test that they are free from opens and shorts.”

“XJTAG is one of the tools in our test armoury which increasingly overlaps and outperforms other test methods, extending beyond the detection of process faults to the true detection of faulty devices,” added Richard Walton. “On one customer design, which contains five boundary scan enabled devices including a ColdFire CPU, three Xilinx FPGAs and an Ethernet controller, we have got test coverage up consistently to around the 95-98% mark by using XJTAG – this has helped us to significantly improve our yields.”

The XJTAG development system is an ‘out-of-the-box’ solution for debugging and testing complex printed circuit boards populated with boundary scan-enabled and cluster devices including BGA and chip scale devices, SDRAMs, Ethernet controllers, video interfaces, Flash memories, FPGAs, microprocessors and many other devices. It can migrate seamlessly through the product life cycle from early design and prototyping through to production, field support and repair.

Prism Electronics offers a wide range of electronics manufacturing services covering the complete product life-cycle, from concept through design, manufacture, test and distribution, to end-of-life. Prism focuses on the production of modest volumes of complex products and prides itself in creating cost-effective individual service and supply chain solutions for customers in a wide range of markets including medical, military, scientific, communications, IT and industrial electronics. The company won the Most Improved Plant category at the national 2005 Best Factory Awards and has recently invested over 100,000 preparing its manufacturing operations to comply with new European legislation on lead-free manufacturing which came into force in July 2006. 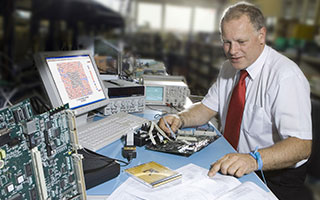