With Ball Grid Arrays (BGAs) becoming more prolific, engineers are increasingly looking for a cost-effective solution that can allow them to debug their boards.

XJAnalyser enables the user to see the logical state of the BGA device. An engineer can then see a visual indication of the current state of a pin and has the ability to change its condition.

XJAnalyser can also make a pin oscillate allowing an oscilloscope to trace out a signal that originates under a BGA.

“As board designs have become more densely populated, restricted access to devices such as BGAs means oscilloscopes continually have to evolve,” said Simon Payne, CEO of XJTAG. “XJAnalyser can provide engineers with a cost effective way to debug their boards and improve productivity.”

XJTAG is now looking to take this further by working in partnership with manufacturers to develop an integrated product – with the ‘XJAnalyser App’ included as standard.

Building on its Technology Partnership programme, XJTAG is interested to hear from other test equipment manufacturers who would like to extend their test capability to include a boundary scan testing solution within their products. www.xjtag.com.

XJTAG is a leading supplier of IEEE Std. 1149.1 compliant boundary scan development tools. Its JTAG (Joint Test Action Group) development system offers a highly competitive solution for designers and developers of electronic circuits. Utilising XJTAG allows the circuit development and prototyping process to be shortened significantly by facilitating early test development, early design validation, fast development of functional tests and test re-use across circuits that use the same devices. XJTAG is based in Cambridge, UK, and is part of the Cambridge Technology Group.

XJTAG was the first boundary scan solution to offer a common platform for use by design and development engineers, test engineers, contract manufacturers and field test engineers, providing testing of not only JTAG-enabled devices but non-JTAG devices as well. 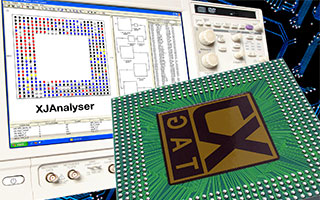