“The XJTAG system is a perfect fit for our development requirements as it enables us to read and write to all of the device pins in the JTAG chain using the XJAnalyser circuit visualisation tool,” said Andrew Evans, design engineer within TTPCom’s silicon hardware group. “With XJTAG, we can view the pin states on screen to quickly locate bridges, breaks, poor joints or incorrect connections, and then isolate any faulty device and rework or reflow it to rectify the problem.”

TTPCom develops designs for the full range of technologies required to deliver a successful cellular handset from antenna to applications. The company delivers tried and tested intellectual property for all components, enabling manufacturers to build working models quickly and allowing them to concentrate on value adding activities that differentiate their products. TTPCom is actively engaged at all stages of handset development through its worldwide collaboration with leading silicon manufacturers, software vendors and handset manufacturers.

TTPCom’s dual mode (2G and 3G) pre-silicon development board is a mobile phone reference platform with extensive development and debug capabilities built-in. It is used by TTPCom to develop and warrant intellectual property (IP), to demonstrate operations and assist with conformance testing. The development platform is also used by customers for developing their own silicon and software.

“It’s important that we get these complex development boards up and running quickly and verify that each one is built according to the schematics as they are used extensively across the business and cost many thousands of dollars,” says Jonathan Healy, design engineer at TTPCom. “XJTAG has exceeded our expectations. Its unparalleled speed, accuracy and ease-of-use have enabled us to shave days, if not weeks, off the development phase of our wireless reference platforms – important factors in the mobile phone industry where time-to-market is so critical.”

The XJTAG boundary scan development system meets the growing market need for a cost-effective solution for testing printed circuit boards populated with JTAG devices such as BGA and chip scale devices, which cannot be tested by traditional methods such as flying probes, logic analyzers, oscilloscopes and X-ray systems.

“XJTAG is designed by engineers for engineers and represents a major advance in testing/debugging techniques,” added Andrew Evans. “We looked at other boundary scan systems but opted for XJTAG due to the speed of fault diagnosis, reusability of scripts, and because their engineers were prepared to go that extra mile. In addition, because XJTAG abstracts engineers from the level of the JTAG bitstream, it makes JTAG easier and more intuitive to use.”

The XJTAG Development System is designed to cut the cost and shorten the development cycle of electronic products and provides a unique solution that can test JTAG as well as non-JTAG devices. XJTAG can test a high proportion of a circuit including BGA and chip scale devices, SDRAMs, Ethernet controllers, video interfaces, Flash memories, FPGAs, microprocessors and many other devices. XJTAG also enables In-System Programming of FPGAs, CPLDs (Complex Programmable Logic Devices) and Flash memories.

TTPCom has established a world leading position with its GPRS, EDGE and 3G protocol software; offers rapid customisation of handsets through the AJAR Platform applications framework; and develops both radio and baseband cellular engines through its Macro products. More than 150 million devices using TTPCom technology have been shipped worldwide. More information can be found on TTPCom’s website at: www.ttpcom.com. 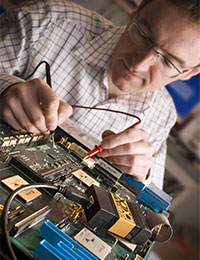